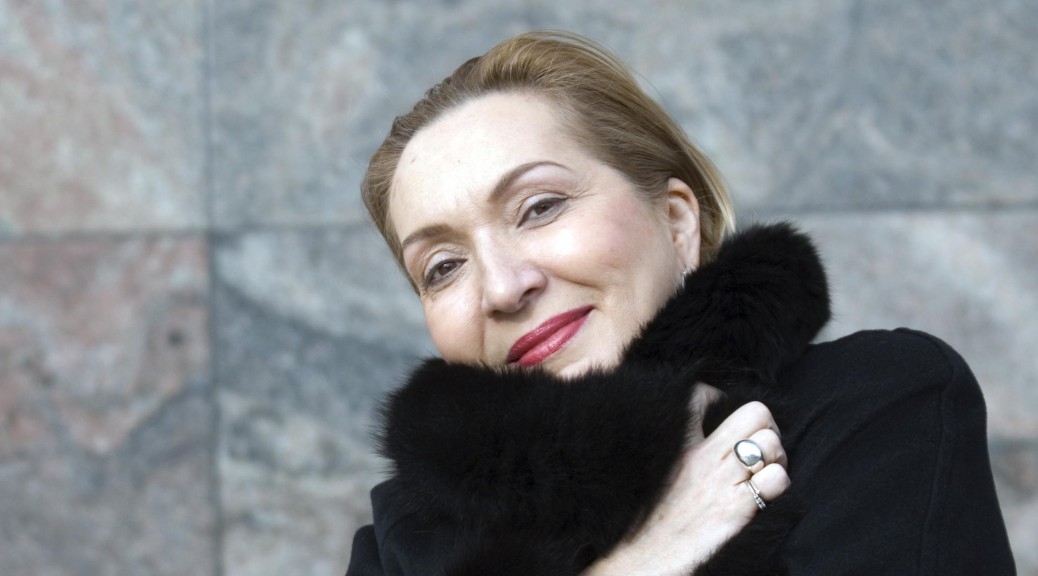 What an incredible honour it is to welcome the incredible Nelly Miricioiu to the Clapham Opera Festival.

Hailed as a singing-actress, Nelly is one of the most versatile artists of our day. Her repertoire extends from Mozart and bel canto to Verdi, Puccini and the verismo to modern italian opera Respighi and Zandonai, taking in French and Russian composers too. As Rodney Milnes wrote in Opera Magazine “this extraordinary diva can sing anything and sing it well “.

Since her Covent Garden debut in 1982 as Nedda in I Pagliacci opposite John Vickers, Piero Cappuccili and Thomas Allen and the 1983 triumphant La Scala debut as Lucia di Lammermoor, Nelly has been heard in all major opera houses of the world. She has worked with some of the most prestigious conductors and directors (in leading roles that include Tosca with Jose Carreras, Jose Cura, Neil Schicoff), Mimi (with Placido Domingo), Violetta in La Traviata (with Franco Bonisolli, Roberto Alagna, Renato Bruson, Alfredo Kraus) and opposite many other leading artists of the day. It was the bel canto repertoire and her dedication to rediscovering forgotten operas where Nelly found her niche. Universally acclaimed for her luscious sound, beautifully constructed technique and exceptional theatrical stage presence, Michael Davdison wrote about her in an article in Opera Magazine: “The highly individual timbre of Miricioiu’s voice, her imagination and intensity, her exceptional range and sense of timing make for a unique talent. ”

Born in Adjud, Romania, Nelly started singing at 5 and was hailed as a child prodigy. At 9 she started studying piano and at 14 she won her first singing contest, Young Talents, Great hopes. At 18 she sung in Pergolesi’s La serva padrona and joined the Conservatory in Iasi where she continued her studies with Tibi Popovici. In 1972 she was the youngest contestant in the Francisco Vinas Musical Competition in Barcelona and in 1975 she won the first prize at the very first Maria Callas Grand Prix in Athens. More 1st prizes followed at competitions in Geneva, Paris, Sofia, Oostende etc.

Nelly made her operatic debut in Mozart’s Magic Flute, as the Queen of the Night at Iasi Opera House, and continued to sing at Brasov Opera House between 1975-1978in roles such as Mimi in La Boheme, Micaela in Carmen and Rosalinde in Die Fledermaus.

In 1981 she fled the communist regime and months later she debuted in Glasgow at the Scottish Opera as Violetta in La Traviata. Manon Lescaut and Tosca followed.

A year later she had her big breakthrough and starred at the Royal Opera House in Covent Garden as Nedda in I Pagliacci opposite John Vickers, Piero Cappuccilli and Thomas Allen. After her successful debut she became a household name at the Royal Opera House where she has sung for over two decades in roles such as Marguerite in Faust, Antonia in Tales of Hoffmann, Valentine in Les Huguenots, Norma, Elisabetta in Roberto Devereux to name just a few. In 1996 she was trusted with the revival of the infamous Tosca production for Maria Callas. The revival was a huge success and established her as one of the best Tosca’s seen on stage. Clive Hirshon wrote in the Daily Express: “Nelly Miricioiu had the requisite passion for the title role plus a melting pianissimo that ravished the house with its purity of tone.” while The Financial Times’ Richard Fairman wrote: “her Tosca is an artist down to her fingertips, the kind who turns every wave in a theatrical event”. She reprised her appearance as Tosca on the Royal Opera House stage in 2001 and in 2003 she enjoyed an immense success as Elisabetta in Roberto Devereux by Donizetti of which a recording was later released by Opera Rara: “it was Miricioiu’s opera, and ultimately her evening. Hers was the longest role and the most demanding, not merely in its manifold technical difficulties but in its range of mood – suspicion, hope, love, hate, joy, pride and finally a bitter, crazed fury. All of these require expression, both in the enunciation of Cammarano’s text and in the vocalizing of Donizetti’s taxing music. Even the greatest bel canto exponents might experience mishaps over such a long ordeal, but Miricioiu’s diligent connection to words, music and meaning held out to the end in singing of outstanding consistency and command.” (George Hall – Opera News)

In 1983, Nelly Miricioiu made her first appearance at Teatro alla Scala as Lucia di Lamermoor. Her debut on the demanding stage was an absolute triumph. There was unanimous praise from the critics and newspapers for her extraordinary performance. Corriere della Serra said: “La Lucia who resembles Callas Triumphs, Nelly Miricioiu, substituting Luciana Serra, has reaped nine curtain calls.(…) Thunderous applause in the finale of the opera, has opened the doors of success for this singer.” After this success, Nelly went on to sing on the stages of the most important opera houses in Europe such as Amsterdam, Bruxelles, Rome, Hamburg, Berlin, Geneva, Munich, Vienna, Salzburg, Paris, Madrid, Barcelona etc. where she has been highly praised and acclaimed for her characterization of roles as diverse as Violetta in La Traviata (a role which she has reprised more than 350 times), Mimi and Musetta in La Boheme, Cio Cio San in Madame Butterfly, Silvana in La Fiamma, Adriana in Adriana Lecouvreur (a role which she debuted at La Scala in 2000), Francesca in Francesca da Rimini, Isabella in Robert le Diable, Elisabetta in Don Carlo, Gilda in Rigoletto, the four soprano roles in Tales of Hoffman, Magda in La Rondine, the title role in Iris by Mascagni and Norma by Bellini, Lucrezia Borgia and the three Donizetti queens, Thais, Semiramide, and many more.

Nelly has enjoyed an extremely successful relationship with the Washington Opera, where she sang roles such as Imogene in Il Pirata, Elena and Margherita in Mefistofele, the title roles in Ana Bolena, Lucrezia Borgia, Manon by Massnet and Violetta in La Traviata. In 1989 she made her debut at the Metropolitan Opera in New York as Mimi in La Boheme. She continued to sing most notably in Philadelphia, Dallas and San Francisco and in 2007 she made her house debut at New York City Opera as Agrippina. Nelly has also appeared in South America, where she has had success in Santiago and the famous Teatro Colon in Buenos Aires.

In 1985 she began a famous series of Vara Matinee Concerts at the Amsterdam Concertgebouw and over the two decades years continued to extend her repertoire to include the great bel canto heroines. In these roles she could advance her own unique artistry in the way for which she has today become so highly acclaimed. Her Armenaide (Tancredi) at the 1992 Salzburg festival was greatly admired and she continues to sing other Rossinian roles such as Armida, Semiramide and Ermione to similar acclaim.